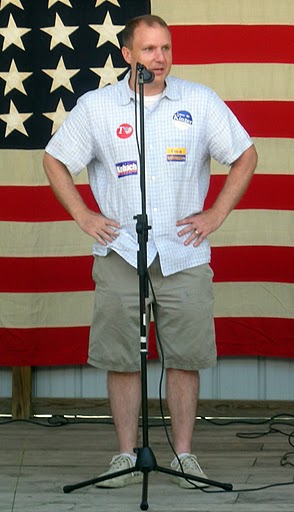 You know if Kansas State Rep Lance Kinzer is involved, it’s going to be good. I get more material for this blog from my google alert out on him than from any other single source.

So it is with an air of comfortable familiarity that I relate to you his plans to chip away at women’s ability to access late term abortions in Kansas, despite the fact that a psychotic killer already murdered the only person who provided them in the state. (Just to be clear, late term abortions are already restricted to women who need them to prevent serious bodily harm or death, along with a variety of even less sensical restrictions.)

Tiller was the face of the abortion debate in Kansas — and sometimes nationally — because his Wichita clinic was among a few in the U.S. performing abortions in the last weeks of pregnancy. Tiller’s clinic has been closed since he was shot to death in May and no doctor or clinic elsewhere in Kansas is doing the same work.

But legislators who oppose abortion still expect to pass a bill requiring doctors who perform late-term procedures to report more information to the state and making it possible for them to face lawsuits if patients or others come to believe their abortions violated state law. Abortion opponents contend such issues are still compelling, even if no doctor or clinic is performing abortions as late as Tiller did.

Some abortion rights supporters had hoped for a break from the Legislature’s perennial debates over abortion because of lingering revulsion over Tiller’s murder, including among many abortion opponents.

“There’s nobody in the state of Kansas who’s doing abortions past 22 weeks of pregnancy. It’s a moot issue,” said Peter Brownlie, president and chief executive officer of Planned Parenthood of Kansas and Mid-Missouri.