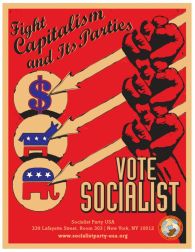 Many people believe there aren’t any organized alternatives to the corporate duopoly show that comes to town every election season. The good news is that there are many options, and the more votes that leftist parties get, the more legitimacy they gain in the media and the public eye, and the closer they get to being real challengers to the status quo. (Learn more about how that can happen here.)

A vote for a Democrat or a Republican is a vote for business as usual: systemic racism, patriarchal abuse of women, queers and trans folk, labor abuse, murderous military adventures abroad, destruction of public goods and services, and of course fat cat corporate oligarchy. Despite what liberals say, YOU DO NOT HAVE TO VOTE FOR THIS SYSTEM. Do not be emotionally blackmailed into another cycle of legitimizing this system only to watch it hurt the same people it always hurts. You have options, which include not voting (a legitimate choice in itself, called conscientious abstention), or voting for Progressive, Socialist or Communist parties. Below is a list of currently active leftist parties, with links and short self-descriptions.

The largest leftist party is the Green Party, which boasts over 100 elected officials in the United States. 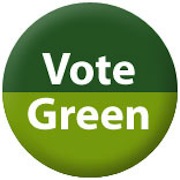 Committed to environmentalism, non-violence, social justice and grassroots organizing, Greens are renewing democracy without the support of corporate donors. Greens provide real solutions for real problems. Whether the issue is universal health care, corporate globalization, alternative energy, election reform or decent, living wages for workers, Greens have the courage and independence necessary to take on the powerful corporate interests.

But there are so many other options for Progressives, Socialists, Communists, and other Leftists. For example:

The Trotskyist Socialist Alternative, with a city council member in Seattle, Kshama Sawant.

We are a national organization fighting in our workplaces, communities, and campuses against the exploitation and injustices people face every day. We are community activists fighting against budget cuts in public services; we are activists campaigning for a $15/hour minimum wage and fighting, democratic unions; we are people of all colors speaking out against racism and attacks on immigrants, students organizing against tuition hikes and war, women and men fighting sexism and homophobia.

The New York-founded Working Families Party, which has a state Senator in New York, Letitia James.

Working Families is a growing progressive political organization that fights for an economy that works for all of us, and a democracy in which every voice matters. We believe that our children’s life chances must not be determined at birth, and that America must be a nation that allows all its people to thrive.

The Democratic-Socialist Socialist Party USA, which has an elected official in New Jersey, Pat Noble.

The Socialist Party stands for the abolition of every form of domination and exploitation, whether based on social class, gender, race/ethnicity, age, education, sexual orientation, or other characteristics.

The Freedom Socialist Party is a working class organization composed of women and men of many races, nationalities, sexual orientations and ages who are fighting for a new, just social order that will serve the majority of the human race. In a time of environmental and economic crisis, perpetual war, high unemployment, immigrant scapegoating and rampant corporate theft, we reject despair and work collectively for a future cleansed of all oppression and violence. 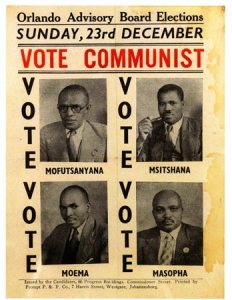 A better and peaceful world is possible — a world where people and nature come before profits. That’s socialism. That’s our vision. We are the Communist Party USA.

The Marxist-Leninist Party for Socialism and Liberation

At the same time as we aim for revolution in this country, we stand for defense of the existing workers’ states, the national liberation movements, and for workers and oppressed people around the world. The magnitude of our tasks will be matched by our determination to win.

The Peace and Freedom Party, which has had such notable nominees for president as Leonard Peltier, Ralph Nader, and Roseann Barr.

The Peace and Freedom Party is committed to socialism, democracy, ecology, feminism and racial equality. We represent the working class, those without capital in a capitalist society. We organize toward a world where cooperation replaces competition, a world where all people are well fed, clothed and housed; where all women and men have equal status; where all individuals may freely endeavor to fulfill their own talents and desires; a world of freedom and peace where every community retains its cultural integrity and lives with all others in harmony.

The Socialist Equality Party is a political party of and for the working class. The SEP seeks not to reform capitalism, but to create a socialist, democratic and egalitarian society through the establishment of a workers’ government and the revolutionary transformation of world economy. We seek to unify workers in the United States and internationally in the common struggle for socialism—that is, for equality and the rational and democratic utilization of the wealth of the planet.

Socialist Action is a national group of activists committed to the emancipation of workers and the oppressed. We strive to revitalize the anti-war, labor, anti-racist, feminist, student and other social movements. In the process we hope to bring activists together from different backgrounds into a revolutionary workers’ party that can successfully challenge the wealthy elite. Our ultimate goal is a truly democratic society organized to satisfy human needs, rather than corporate greed.

What the Justice Party envisions:

A peaceful nation and world where social, economic, and environmental justice prevail.

Time to change your party affiliation on your voter registration card? Who doesn’t want to be a card-carrying Communist??

Really peeps. Let’s have a little discussion… I think it will be fun and insightful. How do you define socialism? No, not the dictionary, unless you want to ref your fave def. But what does it mean to you, deep down inside?

If you want, share with the group: do you consider yourself socialist? Oh please tell us all the juicy details!

Please do not discuss whether Obama is a socialist or not. BORRRING. Keep it personal! Very personal.

Hasn’t the epithet “Socialist!” run out of steam yet?  I am so bored of hearing it used to describe anyone left of hard right.

I ask my question rhetorically, of course, because we all know that it isn’t going anywhere. If someone would like to submit to me a history of its use in American political discourse, I’d sure appreciate it.

I believe that we, that is, all of us who are ever tarred with the Socialist! brush, allow it to be an effective weapon against us. It can be used effectively against anything: bank regulation, anti-pollution efforts, public housing, bailouts, universal health care, labor organizing, and now, apparently, being gay. And why? Because as soon as anyone even slightly liberal hears it, and especially if that person identifies as a Democrat, they recoil in horror and emphatically deny the defamatory “accusation”. We try and think of ways to explain beliefs, positions, or policies to avoid accusations of that term. Our reaction to deployment of this term has not gone unnoticed by the opposition. Now that we have invested their weapon with power, they will continue to use it until we take that power away again.

What does the insult “Socialist!” even mean to the person who hurls it? The same people who use it will often simultaneously and without a hint of hesitation add accusations of Communist!, Nazi!, Maoist! and Fascist! to the mix. Apparently many are unaware of the separate meanings of each of them, or the actual definition of socialism. There has been definition creep. Now all these terms seem to mean “any person who advocates government action not approved of by conservatives.”