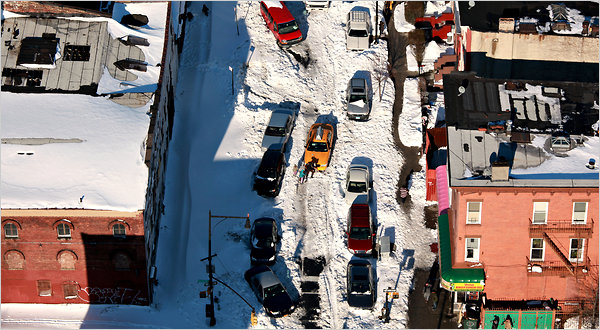 The “hurricane blizzard” that occurred in the Northeast during the weekend of December 25-26 was the subject of national news coverage, specifically the effects on New York City as it experienced an embarrassing failure to properly plan for and handle the storm. The city was paralyzed from Sunday the 26th until the following Wednesday. In a city that experiences snow storms every winter, people began to wonder why the government couldn’t be bothered to show some leadership.

From all corners rumors started to swirl that Sanitation Department workers and supervisors had devised the bungled clean-up as a grass-roots “strike” of sorts to retaliate against a recent series of budget cuts, layoffs, and demotions.

“They sent a message to the rest of the city that these particular labor issues are more important,” said City Councilman Dan Halloran (R-Queens), who was visited yesterday by a group of guilt-ridden sanitation workers who confessed the shameless plot.

That quote was then republished at the even more venerable Townhall, but with a slight change:

“[Unionized city workers] sent a message to the rest of the city that these particular labor issues are more important,” said City Councilman Dan Halloran (R-Queens), who was visited yesterday by a group of guilt-ridden sanitation workers who confessed the shameless plot.

You see what they did there? Townhall also took it upon themselves to name that piece Charge NYC Union Leaders With Negligent Homicide. Oh yes they did.

The conservative FrontPage Magazine reported on the situation, then on the second page of their story referred to the “union’s alleged strategy” which they deduced was “centered around the idea that dragging out snow removal would allow them to pad overtime checks.” No source for this juicy information was listed.

It appears that certain media outlets are simply rewording their reporting as Townhall so blatantly did: instead of discussing “sanitation workers” they fill in the blank with “union members”, because many of the workers are union members. But because there is no evidence of the union planning an action, this makes about as much sense as blaming it on some other identity many sanitation workers share, such as gender or car ownership or marital status. Nowhere is any primary source referenced to prove that the snow-removal slowdown was a union-organized action. As a matter of fact, all of the news sources I found published quotes from union leaders who say that there was no union action at work. And isn’t it the typical strategy of unions to announce their actions, their reasons, and the anticipated results? Union leaders don’t typically deny a mass action, because their power comes from their ability to organize a mass action.

The NY Post did manage to squeeze some interesting information into its reporting:

In the last two years, the agency’s workforce has been slashed by 400 trash haulers and supervisors — down from 6,300 — because of the city’s budget crisis. And, effective tomorrow, 100 department supervisors are to be demoted and their salaries slashed as an added cost-saving move.

Sources said budget cuts were also at the heart of poor planning for the blizzard last weekend. The city broke from its usual routine and did not call in a full complement on Saturday for snow preparations in order to save on added overtime that would have had to be paid for them to work on Christmas Day.

The Metropolitan Transportation Authority decided against putting an urgent-level emergency plan into effect in anticipation of the storm — opting instead for its lowest-level strategy, which was woefully inadequate, a source told The Post.

The source said the MTA implemented its “Plan 1” over the weekend rather than “Plan 4” — the highest emergency alert.

Huh. Laying off workers, pissing off workers with non-performance based demotions, “saving money” by cutting back on disaster planning…. we can be certain that none of these decisions by the leadership have anything to do with the poor snow clean-up or demotivated workers, because some of these workers were UNION MEMBERS!

So the question remains, why did conservative media sources choose to blame unions for the hurricane blizzard response, when there is no evidence that unions were involved? It’s almost as though they have some sort of agenda!